As Canada’s original juice and smoothie bar, our mission is to create long-standing customer relationships by consistently delivering an incredibly delicious, convenient and nutritious product, perfectly suited for an active lifestyle.

From day one, we've been committed to providing customers with food they can feel good about. As a leader of healthy alternatives in the quick-serve industry, we're consistently looking for new and innovative health products to add to our menu. Today, Booster Juice has expanded to almost 400 locations around the world, bringing smoothies, fresh-squeezed juices and delicious hot food items to active customers on the go!

As Canada’s original juice and smoothie bar, our mission is to create long-standing customer relationships by consistently delivering an incredibly delicious, convenient and nutritious product, perfectly suited for an active lifestyle.

As a brand, we promise to offer premium products while providing an extraordinary customer experience in a clean and safe environment.

Born and raised in Waskatenau, Alberta, Dale Wishewan has always been driven to pursue and achieve success. Possessing a lifelong passion for sports and fitness, he attended Portland State University on a baseball scholarship. He was no slouch academically, either, earning his B.Sc. in mechanical engineering. After graduation, he returned to his home province to work in international technical sales for a company called Edmonton Exchanger. Dale enjoyed 8 years at Edmonton Exchanger growing an international division that didn't exist. While travelling in the U.S., he noticed the popularity of juice & smoothie bars, and realized there was an opportunity in the Canadian fast-food market to provide healthy alternatives to consumers with an active lifestyle. Making his own protein concoctions for years and his interest in health and wellness made this an easy decision. 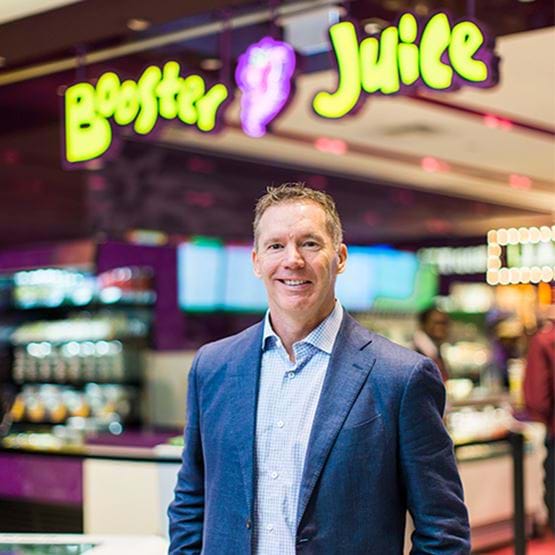 With the goal of bringing fresh and healthy food to the masses, Dale's kitchen served as the testing ground for one creation after another - including some of the most popular smoothies on our current menu! The first Booster Juice location opened in Sherwood Park, Alberta, in November 1999. The timing was perfect...or was it? Dale was opening a new concept going into the dead of a Canadian winter selling a cold beverage. Co-workers, neighbors, and friends thought Dale was crazy to embark on something so foreign to Canadians when he had such a great career at Edmonton Exchanger. If there is one trait Dale exemplifies, it is determination. His grade 1 teacher, Mrs. Flaska, said she had never seen a student in all her years of teaching as determined as Dale. With Dale's level of determination, nothing ever seems out of the realm of possibility. Not even selling smoothies in winter. As it turns out, people were ready for a healthy fast-food alternative, and there was nothing else like Booster Juice in the market. With the decision made to open a juice and smoothie bar things moved quickly. By the end of year one, 15 locations were open and in year two, 35 more were added. 50 stores in 2 years is considered a Canadian Franchise Record for store openings from inception. When others in the Food Service Industry have asked how in the world he was able to open 50 stores in 2 years, Dale's reply is always the same. "I didn't know in the first year whether 5 stores was typical, or 25, and everything came naturally from a project management side. The next thing you know we had 50 stores."

Now, Booster Juice is proud to be Canadian born and blended worldwide.